We first met Chrissy Zmijewski in 2008 when she entered our competition. She had consistently been placing in the top 5 at non-tested Figure events, and was fed up with everything surrounding “unnatural” practices. For more than a decade prior, Chrissy had been building an incredible resume in the realms of mental health, relaxation techniques, yoga therapy, body synergy,

neuroscience, holistic health, performance enhancement, nutrition, and advanced personal training. Chrissy has written articles and books about these subjects, and was the Education Coordinator for the Exercise Science Program at Bryan University. You could say Chrissy is the most “natural” athlete we’ve ever met.
A determined athlete she is as well. When Chrissy placed 2nd in 2008, she immediately called for feedback, and asked for posing consultation. It was a close 2nd that year, and by applying effort in every single place for improvement, Chrissy went to Washington the following month, and blew away all competition to earn the WNBF Pro card.She placed 3rd in Pro events that year, and then came back in 2010 to place 1st – EVERY time! She won our Pro USA in 2010, 11, 12, & 13, and she put a World Champion title on in 2012 as well.  As I announced that event myself, I came to tears as I was so proud of Chrissy’s win!!  Chrissy has been an incredible supporter of natural bodybuilding in so many other ways as well. She and her husband, James Astin (Dr. B), judge for all of our Northern California events, and 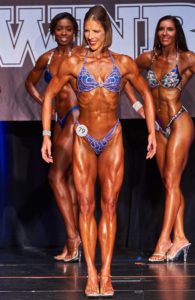 they have presented at many of our seminars, training camps, and posing clinics. Of course her clients compete in natural events, and Chrissy is Always concerned about the welfare of our sport foremost. We would be rich if we had a dime for every time Chrissy says: “Just let me know if there’s anything I can do to help”. THANK YOU Chrissy!!